Coming Out: It Happened to ME 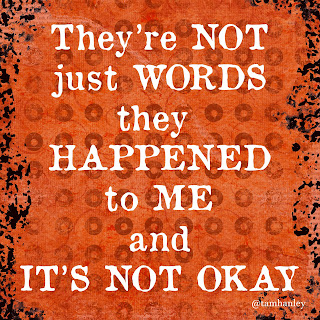 So yeah. I was listening to this tape that was released on Friday and it occurred to me that twice, when I was singing with a couple of different bands in my younger years, I was grabbed like that and forcibly kissed, even told that I might get more songs added to the sets if I could make sure the lead singer's inexperienced nephew got a little experience. Over hours of listening to the Trump tape over and over, it dawned on me that I had had this happen to me. repeatedly, and that I'd dismissed it as "just what guys do." Shamed myself for putting myself in that place. Dressed a certain way. Whatever.

Since that, dozens of memories have flooded my mind. And in all cases, I didn't mention it, and I still dealt with that man on a regular basis. I might have been uncomfortable and managed not to be alone with him, but I wasn't really afraid except about losing whatever position I had. He, and I, were both from the culture that "that's what guys do." Note: These were all married men. I was between 16 and 25.

Jump forward 18 years. I have a daughter who is visited in our home by a boy she'd known from school. When he left she walked him out onto the porch and he grabbed her bottom. I was angry but didn't confront him, and didn't encourage her to. The next time he visited my husband hovered over him until he left. But STILL.... it's "what guys do." I thought it, and I let her think it. And for sure that boy had thought so.

Well FUCK THAT. If it's what guys think guys do, and it's what girls think guys do, it's time for somebody to say NO. YOU MAY NOT. I pick us girls. And the only way to do it is to say out loud A GUY THOUGHT HE COULD HAVE HIS WAY WITH ME BECAUSE HE HAD SOMETHING I WANTED, AND IT IS NOT OKAY.

Because I don't want my daughters or granddaughters to think it's just a "part of being a girl" to be.... well, man-handled. If some guy puts a move like that on my granddaughter I want her to punch him in the face, not feel unsure if she caused it, or brought it on herself, or maybe it was okay and nobody would care if she tells. In fact, I might make a dummy and TEACH her to punch him in the face. I'm that kinda Nana.

They are NOT just words. They are words narrating what YOU DO AND HAVE DONE, and it's NOT OKAY.