Coming out: The White Supremacy edition

**please note that the big white block in the middle of this article (and it's rather an ironic thing that it's a big white block....) was originally United D@ughter$ of the Con7eder@cy but without the symbols. Somehow they managed to get themselves censored out of this post. Freedom of the press indeed.

Image of Memorial to the Murdered Jews of Europe

Image of Statue of Adolf Hitler standing in in Berlin. 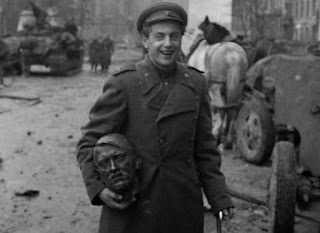 Oh wait. It's not standing. It was decimated in 1945. And guess what? It wasn't replaced with a shiny new one. I wonder why?

The image on the top stands as the reminder the world needs. And we don't need a statue of Hitler to remember who was responsible or what evils were perpetrated.

I hate applying these same standards to Robert E. Lee, because I'm a southerner and I have held fast to my southern heritage as something to be proud of. I've downplayed any complicity in the fact that many of my ancestors kept slaves because "everyone did." I've researched numerous ancestors who were actually Confederate soldiers, and with that information I was qualified to join the United Daughters of the Confederacy, and even attended one of their meetings. I never finished the paperwork and I marked it down to being too busy, but that wasn't really the truth.

For years I've justified being proud of Confederate ancestors by declaring that they fought for what they believed in, and besides had I been alive at any point during the years of slavery, I would have objected to it just as I presently object to abortion. I've therefore washed my hands clean of something I never really sullied them in to begin with. 'Sall good, right?

But it's not. The reason I never completed the UDC application process was the racism evident at the one meeting I attended, where there was a lot of conversation that included the nearly but not quite whispered words "coloreds" and "Mexicans," as if the "colored and Mexican" waitstaff around the edges of the room couldn't hear. And really, it was irrelevant if they did because they were just The Help. It was if The South was still alive in that room, and I didn't say a GODDAMN WORD against it or even about it. That was 8 or 9 years ago and I didn't even tell my husband about it until last night. So much for asserting I would have been outspoken in the way-back-when.

Well in order to CHANGE we have to speak the truth, confront it, dig it out, and bear witness to it. Let me tell you, it takes the indignation and self-righteousness right out of you. We get so angry when our past is questioned, and usually that's a fast recovery for the pang of fear we feel first. But when you just let the fear come ahead on, and name it, and bear witness to it...."_______ happened," something else happens.

I know. I did it. I'm doing it. I'm saying out loud that my lily-white DNA matches me to many, many Black Americans, well-known ones and not-so. It's not because of "diversity." It's because they and I share ancestors who raped their slaves, and I own that. But exactly what does owning it mean? It means acknowledging it, first and foremost, with no caveats or attempts at justification. It also means that from that wicked foundation sprung my being born several steps ahead in life than those of color, because they did the work that built that foundation. The frontier that was broken, the land that was cleared, the homes that were built and the wealth gathered in the fields were all work done by Black slaves. Black slaves left behind a legacy that I was born into, and white slave owners took the credit. What's more, I own that I myself have harbored a little white supremacy all along. It's wicked, it's there....and I know it! Click here for a related post.
Now I can begin to change. Now I can begin to change. Now change can begin me.

Now we have the opportunity to raise monuments that show the whole story and the true story in one place, and how it's shaped us and how we'll use that truth to shape the future,
Posted by Tammy at 8:21 AM No comments: