Week before last we were having new windows installed in our house. Meaning big gaping holes that looked very much like escape hatches to Holly, my little Houdini Chihuahua. So she and Dixie were locked behind the baby gate in different areas where work wasn't being done. And Holly started to whine, and shake the gate with one of her paws and cock her head as if politely asking for release.

So we put their leashes on them and took them outside to "do their business." It was just an instant....she slipped out of her leash and took off running down the sidewalk, saw a person on the sidewalk and darted out into the street to avoid them, and was hit by a car. And I watched it all in amazement. And horror.

And that was it. One moment I had this cute little dog, and the next moment she was gone. She ran off like that all the time, any time she got a chance. But she always came back. I never chased her because she'd just run farther and faster. Usually I'd just go inside and leave the door cracked open, and when she got tired of being a little PITA she'd come back and nudge the door open and it would close behind her of its own weight. Sometimes I wouldn't even hear it but she'd be standing right in front of me with her ears sticking straight up. Like, "I'm back!" But that's never going to happen again. She's never coming back.

During all this time there's so much going on. Two precious little girls to watch, a new baby boy to hold and sing to, the whole of Facebook in a continued uproar over politics, traffic at its holiday mad peak, stores packed to the brim with holly and jolly and people gearing up for tomorrow, the day of gratitude to be followed by a month of festivity and good will to men....and greed. Everything is moving at this super-fast pace filled with the entire spectrum of emotion. And I see it like I'm outside it all.

Because my little dog died. And she's never coming back. 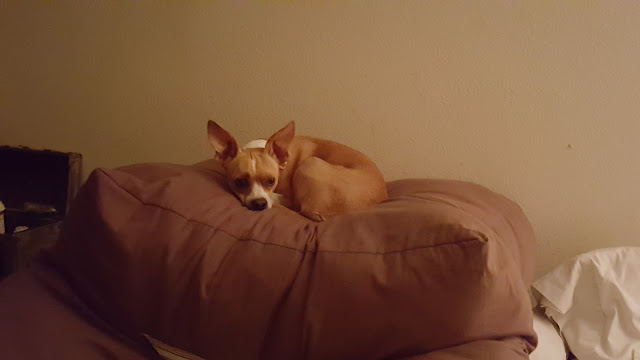 Coming Out: My Views on Immigration 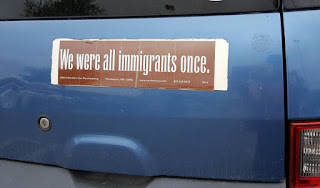 I come from Texas. I mean WAY BACK. Several branches of my family came here from Tennessee in 1831 when the Mexican government offered land grants to Americans who would come settle the Texas landscape to avoid its being taken by other countries. Eventually a new government came into power and changed the deal, and Texas famously revolted and became a republic, later to be annexed into the United States.

Before that, my ancestors came from England, Ireland, and Scotland to build and later defend the colonies that became the United States. Other ancestors came over from France and Germany in the 1840's; one of those a woman fleeing with her children from what appears to have been an abusive marriage. I meet criteria for joining the CDXVII, DAR, DRT, and both the UDC and DUV. When I say I am the product of immigrants, I mean it and can damn well prove it.

I grew up in Texas, where it never really hit me how differently Mexicans were treated until only recently. It was just "the way things were," as I recall, and surprised me none when my grandfather hired "wetbacks" to do the heavy lifting on building projects, or that the ladies who cleaned house for my grandmother and cooked such amazing meals were Mexican. That was just the order of things. Now, to be fair to myself, this wasn't something I carried into school, and we were all friends regardless of color (and still are). But I realize in hindsight that THEY felt the difference. It was, after all, THEIR families that families like mine took advantage of and looked down on. And it was "just the way things were." I had truly no idea how just 20 years before, Mexicans had been put through such a ringer in their own battle for civil rights.

Anyhoo. So my kids are, in part, Mexican (even though their dad's side of the family denies this vehemently because of their own experience with racism in our mutual hometown). And my stepdaughters are in part Mexican, which thankfully is embraced so they get to experience ALL sides of their heritage. The grandchildren from both natural and stepkids are, at least in part, Mexican. And I'm pretty sure everyone is legal to several generations back. But let's say they weren't. Would I vote for some jackass wack job who would send back ANY member of my childrens' families? To a place where they were not as safe as they are here? If the answer of that is NO, I must apply that same answer to those outside my family....even to those outside my awareness. If someone fled here from a dangerous place, should we send them back? My family fled here from danger in an over-100-year span. Thank God no one can pinpoint me and say, "Guess what? You're going back to Germany. See ya."
Posted by Tammy at 8:17 PM 2 comments: